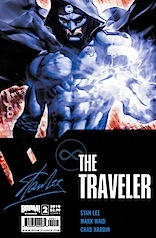 Maybe I’m just overly sensitive to this kind of thing right now, but Waid refers to one of the characters as an “unemployed sales clerk.” Um, if she’s unemployed, she’s not a sales clerk. I guess it sounds better than token black character.

This issue is actually leaps and bounds better than the first, even though it’s real silly in parts. Like when a Norman Osborn lookalike shows up (guess what, he’s the bad guy). And he’s in love with the Traveler’s girlfriend! Shocker!

What’s cool is how Waid’s got everything weaved together. Even if the dialogue’s way too expositional and a little hackneyed, Traveler is compelling anyway.

Once the story is unraveled of course, I can’t imagine there being much dramatic thrust.

Some of the plot contrivances are so obvious, it makes the comic an entertaining read (as in, Waid can’t be asking the reader to take it seriously).