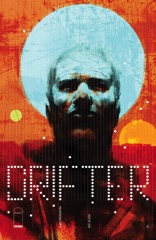 After one issue, all Drifter has done is establish itself as another sci-fi Western. It’s not a new genre. Nic Klein clearly works at the art, so while the design work reminds of other sci-fi movies, TV shows and comic books going back forty years, at least he’s visibly committed.

And writer Ivan Brandon seems committed too. Unfortunately, he shows that commitment with truncated narration and dialogue–Drifter reads like a pulp novel with its tough guy (and girl) dialogue. Ditto the protagonist’s narration. Instead of establishing characters, Brandon goes with caricatures.

Only the comic is about some guy who wakes up in a settlement on an unknown (to him) desert planet. Without Klein’s illustration–which seems fit more for covers to old science fiction paperbacks than it does to sequential narrative–Drifter wouldn’t have much going for it. It’s blandly inoffensive, unimaginatively derivative. There’s just no meat.