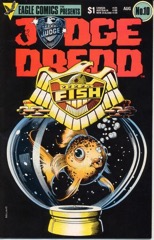 This issue reads a lot smoother, with Dredd again a fugitive, leading the revolt against the crazy new chief judge. Unfortunately, Wagner goes for absurdity at every turn–the new chief judge is so crazy he appoints a fish as his deputy–and it’s never believable the other judges would follow the new leader with such blindness. It’s almost like Wagner saw he couldn’t make the story work straightforwardly, so he introduced the lunacy to at least make it funny.

And there are a couple decent comic moments but there’s also a lot of laziness.

Of the three pencillers, Brett Ewins does the best on his pages. He captures the mania of Wagner’s script and the enthusiasm helps a lot. The pacing gets the better of McMahon, who handles the beginning of the issue (and the setup); he can’t keep up.