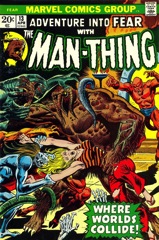 Oh, very good news–Val Mayerik is on the pencils (with Frank Bolle in inks). From the first couple pages of Man-Thing, it's clear the art is going to be a lot better. It shouldn't be particularly obvious, as it's a Man-Thing story and Mayerik doesn't illustrate him until later in the story but the way Mayerik draws the supporting cast is enough to show things have turned around.

Gerber fleshes out that supporting cast more here, he shows how the local girl is somehow linked to Man-Thing, for instance. But he's also got a better grip on how to write Man-Thing himself. While Gerber does fall back on Man-Thing's human side getting dialogue, the sequence is effective and doesn't seem forced.

Maybe because it's in the second act, not the third. Anyway, good feature.

The sixties backup has indistinct Gene Colan art. The Lieber and Lee story's distinctively crappy though.