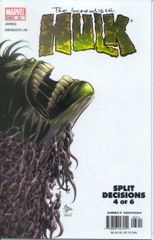 I guess this issue’s an improvement; the series is so far along at this point it’s hard to tell. But the banter between characters goes away a little. Doc Samson and Sandra (she’s the regenerating spy who started out Jones’s run or somewhere towards the beginning) don’t have any banter. It’s just Mr. Blue and Nadia. Jones again feels the need to turn every female character into an action hero. They aren’t heroes in the moment, they’ve had training. It’s ludicrous.

The comic sort of feels like Jones wanted to do some kind of espionage thriller and married it to Hulk. This issue, though the Hulk’s in the comic far more than usual–even for Hulk issues–he’s just a sideshow attraction. The real story is the giant conspiracy.

It’s boring to read a comic without a main character. Especially a comic called The Incredible Hulk.

Still, the cliffhanger’s not half bad.