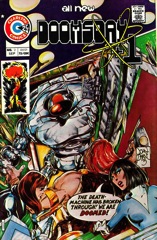 So Barbie is falling in love with the thawed cave man. I doubt Gill will be able to sell it, though it does give his characters something interesting. There’s nothing otherwise. The Ken guy gets kidnapped by an evil Soviet cyborg and it’s all painfully boring.

Gill only continues the ravaged world exploration thing for a couple pages. Mostly he’s just got armies of robots attacking the survivors and then they hop a fighter jet to Mother Russia. There, they have another lengthy fight scene. There’s some talking, but it’s Ken and the cyborg. Very boring.

Byrne does have some wonderful composition this issue, however. Even though his details on people aren’t particularly special–he rushes on the people–the rest of his art makes up for it. Doomsday + 1 almost has a good setting; instead of developing it, Gill fills it with action.