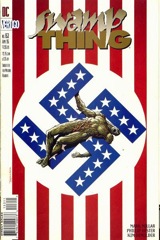 The pacing is a mess this issue. It’s a decent little issue and all, but Millar’s pacing is just a disaster.

He introduces a world where the Nazis won, where Hitler’s son runs the world (and is married to Marilyn Monroe) and the President of the United States has no problems more than a wandering wife. It’s a perfect world.

And Alec shows up inhabiting a Golem in order to destroy it. Or maybe not. It’s up to Alec, who finds the Nazis prove more environmentally conscious than the Allied nations.

It’s a weird issue to be sure–one has to assume Millar took some joy in showcasing the ultimate bad guys as the ultimate good, just because it’s so out of whack–but there’s really nothing to it.

The President’s a limp noodle of a protagonist. Maybe if Millar had made him stronger….