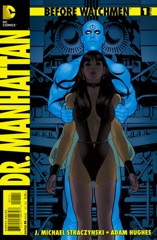 There’s something cool about Dr. Manhattan. Not just because Adam Hughes does the art–though the way he’s able to be stylized and still fluid is impressive; I wasn’t expecting him to do sequential so well.

And it’s not cool because J. Michael Straczynski tries so hard to ape Alan Moore’s “voice” for Jon. It’s cool because Straczynski actually comes up with something a little different than the rest of these Before Watchmen books.

So between this approach, Hughes’s artwork and Straczynski’s successful aping of Moore’s voice for the character, the issue’s not bad.

The pirate backup, however, is horrendously written stuff.