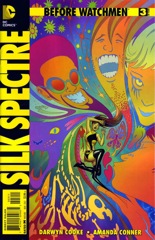 The mystery of the smiley face button is solved! Finally, now everyone can sleep at night. The addition of said button does make one wonder if Cooke’s flipping off Moore a little (as the button is what started Moore’s disputes with DC).

This issue features a lot of things Cooke and Conner should have covered in the previous one, with Sally worrying about her kid instead of just ignoring it (from the reader’s point of view). The ending isn’t great, but it’s whole.

It’s a bridging issue without any memorable scenes. Even Laurie tripping on bad acid turns out to be a red herring.

The comic’s not bad, however. Conner’s art is still a nice mix of straightforward and sixties–not quite indie, but definitely not mainstream vanilla–and the scenes are well-written.

Laurie just isn’t enough of a character this issue.

The crappy backup has a terrible cliffhanger.