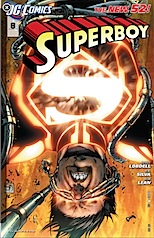 Lobdell, always original, opens with an “homage” to Pulp Fiction. Along with Silva and Lean’s sparse, awkward artwork, it does not suggest this issue of Superboy will be an improvement on the last.

Silva, who I apparently found okay before, is really lousy here. There are a couple panels I can’t believe DC let be published with the Swoosh on the cover. The artwork is stunningly amateurish.

As for the writing, Lobdell is now firmly situated in Superboy’s point of view. He’s using it mostly for exposition–Superboy thinking about how his powers work, for example–and he can’t make it feel contemporary with the action.

Lots happens but almost nothing happens. Superboy goes to the center of the Earth, aids and abets a murderer and fights a Greek or Roman goddess. Lobdell and Silva fail to make any of those events interesting.

Superboy is almost too lousy to mock.