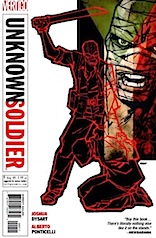 His name’s Jack, which I can’t believe I forgot. This issue is both prequel and sequel to the previous one, following Jack instead of Moses. What’s neat–I may have made this observation before–is how Jack is less easy for the reader to identify with than Moses. At least Moses has some mainstream to him. This issue fills in Jack’s backstory a bit–he’s been in Africa since 1965.

Moses might have had an iPod (Unknown Soldier being set in 2002), but Jack has not.

It’s actually a pretty quick read, since it’s almost all action, as Jack gets himself in some trouble and has to get out of it. There’s this wonderful moment at the end when Jack, who Dysart has narrating, reveals himself to both Moses and the reader (revealing different things).

Not a revolutionary move from Dysart, but it’s fine writing.