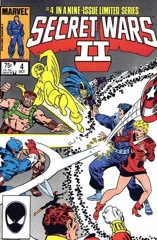 You know what’s worse than a Beyonder who’s an obnoxious pin hole in the night sky (see Secret Wars I issue number one through twelve)? A Beyonder who won’t shut the heck up. Shooter has decided, after four issues, the Beyonder is now going to be not just a blabbermouth, but one who knows everything about earth culture. Sorry, Earth-616 culture.

The worst thing about this issue, this fourth issue, is how many issues there are left to Secret Wars II. Oh, thank goodness, it’s only nine issues. I thought it was twelve again.

Shooter fits a bunch of story into the pages, but it’s a crappy story. He does write Dazzler well, which surprised me a little, since I always figured the character was complete nonsense. But Shooter makes her into a solid character.

Milgrom’s art is really goofy at times in this issue. Bad perspective.