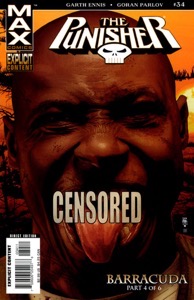 This issue makes two things very clear. First, Punisher MAX would’ve been an even more successful book if Goran Parlov had been handling the art chores throughout. His expressions—for the talking heads scenes—are phenomenal. There’s one scene where the big boss is monologuing to his flunkies and it’s just these three guys sitting around an outdoor table at a bar in Florida and it’s sublime. Parlov’s so good.

Especially when you take the second thing into account—everyone should have to fight a shark in a comic. Ennis and Parlov make Frank Castle versus great white shark into an absolutely phenomenal sequence, especially when you throw in the past tense narration not to mention the opening frame establishing Frank doesn’t end up a shark’s lunch. Parlov’s able to keep the situation terrifying and tense, even when the outcome is foregone.

The issue is split between Frank, the shark, and Barracuda, and then the Wall Street guys. Stephens cries his way back in the fold, pissing off Dermot because the boss treats it as a teamwork learning opportunity for Stephens. The weirdest thing about Barracuda is how thoughtful Ennis gets with the workplace dynamics, sure the big boss is a reprehensible piece of shit, but he’s good at managing people and encouraging performance from his staff. It’s like Dale Carnegie with mass corporate fraud, which might just be the natural result of Dale Carnegie.

Anyway, while Dermot’s running off to lover and boss’s wife Alice to lick his wounds after getting shut down, Frank’s trying to will himself to stay alive despite the considerable damage he’s taken.

Barracuda moves between the two plots, finally sitting down with the boss—after terrifying Stephens and Dermot—to figure out what’s next. Since they think the Punisher is dead, which is kind of an obvious mistake but Ennis has already started peppering in holes in Barracuda’s armor. He’s not quite as serious as he ought to be, in a very different way than Frank, who knows he’s screwing up. Barracuda is just overconfident. His bluster actually works really well with the Wall Street guys’ bluster. Barracuda is a relatively simple arc, but Ennis is very thoughtful in its execution. It’s extremely well done.

And Parlov’s just wonderful to have on the book.