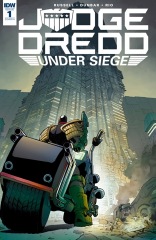 Judge Dredd: Under Siege reads kind of exactly how one would expect it to read from the unrealistic proportions of Dredd compared to everyone else and his really bad one-liners. It opens with the revelation football has been outlawed because it causes concussions. The Judges don’t want people with brain damage or something. Fascists.

Oh, and there’s an armed civilian force. They’re fighting the mutants, who have gotten in from the Cursed Earth.

Doesn’t matter. The story beats in the first issue are almost identical to the movie. Except the mutants.

Dunbar’s art isn’t terrible; other than the Dredd as Frank Miller Dark Knight. Yawn. It also isn’t good enough to make the comic worth reading.