Boom!, Comics, Kong on the Planet of the Apes by Andrew Wickliffe23 January 2018 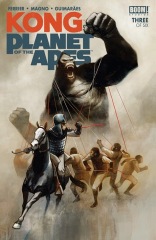 I was wondering how long I could sustain interest in Kong on the Planet of the Apes and I think that answer is three issues. Kong #3 is fine–Magno’s art is less detailed, which sometimes works better than when he’s extremely detailed. Detailed meaning lines. Lots and lots of lines.

The humans are good, the Kong action is good. The Apes? Not so much. I mean, it’s fine, but boring. Ferrier doesn’t have anything for the good apes to do this issue. It’s all the bad apes planning to attack and kidnap Kong.

Because it’s what happens in Kong stories.

Unfortunately, Ferrier forces his way through it all. The scientists keep talking about making important discoveries but they aren’t discovering anything, just talking about it. The gorilla general’s story is ominous and unlikable. It’s unpleasant. The bad apes are planning to kill all the Skull Island humans, it’s just waiting for them to do it.

There’s no humor in this issue either. No witty observations about either franchise. There is some stuff from the BOOM! Kong license, which isn’t the movies and centers around the Skull Island tribal culture.

But those scenes are the ones with better Magno lines.

Anyway. I say I’m done but I’ll probably be back for one more. I just remembered Ferrier’s doing a direct sequel to the first movie and maybe there are some loose ends to tie up from it. Maybe Charlton Heston comes back. Maybe Kong carries Charlton Heston to the top of the Statue of Liberty.

Probably not. But maybe.