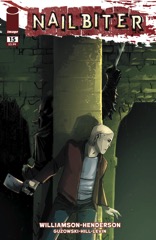 Is the explanation for Nailbiter’s town of serial killers going to be Nazi experiments in the forties? I think Williamson is going to go for it, meaning he’s always had an explanation in mind for the comic. He’s also getting even soapier as it (presumably) winds up.

The sheriff has a big secret, which the flashbacks are hinting at.

The mood overpowers the narrative novelty and that novelty’s all Nailbiter has that this point so it’s a problem.