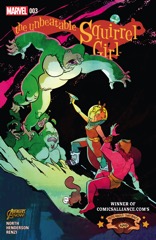 It’s another good issue of Squirrel Girl with a whole bunch of action. Doreen gets into a big fight with Whiplash–while I get what North’s trying to do with the dialogue, the Whiplash dialogue isn’t any good, which might be my only complaint about the dialogue–and then has to save her roommate from bank robbers.

And then get to the moon and deal with Galactus. It’s a busy issue, no doubt.

North knows how to pace that busy issue out in a way it reads fast and never has to slow for the exposition to set up the next problem. Some of that comes to how North blocks out sequences–emphasizing Doreen talking to her squirrel over her adventures in an Iron Man suit–but it’s also just the approach to the comic.

Fast and fun; it’s got depth because North’s able.

Though he does endanger many squirrels.