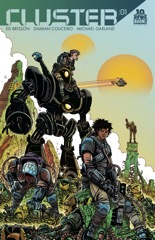 There’s not much original in Cluster so far. It’s a remix of a lot of sci-fi, popular and not, but writer Ed Brisson manages to coat over all those elements because the story isn’t derivative, the details aren’t homage, they’re just part of the sci-fi language now. Of course there’s something out of BattleTech in Cluster. Why wouldn’t there be?

The first issue introduces the protagonist, who doesn’t have a memorable name, but is a politician’s daughter serving hard time fighting for a colony planet. She makes a sidekick (not friend) and gets into a fight and goes to solitary. Then goes out on a mission.

It doesn’t make a lot of sense at times–the way Brisson paces it–but it doesn’t matter. Because Damian Couceiro’s art is awesome. He goes for big scale sci-fi, but still within the constraints of a comic book.