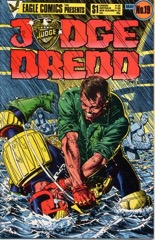 The investigation is exciting, with some very nice art from Smith and Steve Dillon. There’s enough content the issue feels very substantial, especially the way the story of the suspect goes. The cliffhanger is a good one and kind of cool to be the aftermath of a mundane investigation. It’s well-done, but it’s not as interesting.

So a good feature. Then the second, shorter story has Dredd stopping criminals while the people around them respond with apathy. It’s neat one.

The big story was far more impressive though.