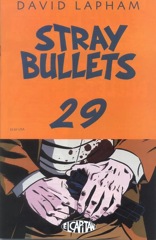 Ugh. Really, there’s no other word for it. Ugh. Lapham’s colliding of all his story lines and characters continues with Roger the detective–the one who had such a cool dating issue–hunting down Monster to find Virginia. Only Lapham has always used Monster as a force of nature, so having him go up against very real cops is kind of like a horror movie.

There’s also a bunch of lengthy jail interviews between Roger and Beth. Not to mention all the journals from Virginia while she was being held captive.

Lapham is bad with all of it. Why read Stray Bullets for a cop story? Lapham established the series as startling stories about people who experience violence. Roger’s just doing his job.

Worst is how Lapham just apes his plotting for the Beth investigation comic. It’s painfully uninspired. While not as bad as it could be, it’s still terrible.