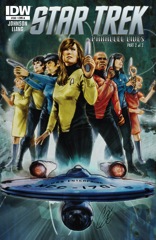 Besides Liang’s art problems–she can’t make the photo-referencing look good and the female McCoy is a disaster–and an illogical cameo, this issue of Star Trek has got to be the best in the series so far.

Johnson’s got a lot of easy jokes, except they’re still honest jokes, so he can get away with all of them. He’s also unconcerned with written–though visual ones get through–nods to the original series. The characters, confronted with their gender opposites, are fully defined. I only wish it were the start of an arc where Johnson traded Chekhov for her female counterpart. She’s less annoying.

A lot of the art is fine. Liang still does well with most of the female characters (except regular Uhura, of course) and she has positive, playful vibe to her work.

The issue’s a very successful outing.