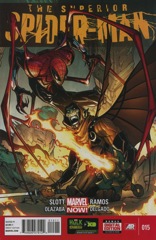 I think with so many Spider-Man issues a month, sometimes Slott gets too disposable with the single issues. There are usually two Superior, I think, then a bunch of others, right? This issue is on the right track again though.

Slott opens with the fallout from Otto taking out Shadowland, with maybe the only weak scene in the issue. He’s trying to explain himself to the suspicious lady cops and one of them reveals she’s got a costumed identity to investigate him. It’s goofy.

Otherwise, there’s a lot of chase the Hobgoblin going on with a fantastic cliffhanger. Slott keeps the series fresh thanks to Otto’s innovative nature.

There are some character pages–Anna Maria is worried about Otto (so are Peter’s friends but who cares about them). One has to hope Slott sends her off well, she’s a lovely character.