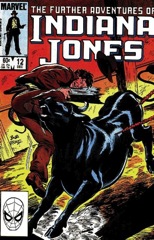 I can’t believe I forgot to mention Indy’s Spanish gypsy sidekick from last issue–he returns here–I think he’s based on Speedy Gonzales. There’s the yellow sombrero and the annoying dialect.

That lame character aside (made worse this issue with Marion falling for his “charm”), Michelinie continues to do pretty good work on Further Adventures. There’s this neat little subplot about these guys after Indy and Speedy continued from last issue; Michelinie just paces it all really well. I suppose Marion arriving so quick is silly, but she plays so well it’s forgivable.

Sadly, the art’s the problem here. Mel Candido is a terrible inker for both Kerry Gammill and Luke McDonnell, who split the pencilling chores. He’s a little better on McDonnell, which means the issue ends better than it starts, but not by much. It starts real ugly.

Great reveal of the relic at the end too.