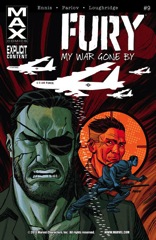 It’s an action issue, mostly, with Frank and Nick taking on impossible odds. Besides the prison break and Nick and his nemesis, Parlov draws it all very calm. The hill is idyllic. Frank’s a sniper in peaceful tall grass.

Ennis gets his little Frank Castle moment, with Nick stunned at the efficiency of Frank’s sniper skills. And Parlov sells the sequence too. He knows how to compose for visual payoff.

The only bit of personality–for the comic, not Nick, as Ennis smartly has him narrate most of the escape–comes at the end. Ennis answers one of the many questions he raises about Nick Fury. If he won’t betray America, what will he do to people who betray Americans?

It’s a good little moment. The best the series has had in a few issues.

Ennis is still running out of steam though.