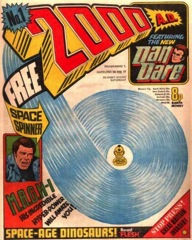 There’s definitely some weird stuff in the first issue of 2000 AD. Quite a bit of silly stuff too. Pat Mills wrote–either solo or with a partner–every story in the issue so the lack of creativity on some of the series might just be exhaustion.

Flesh is about dinosaur hunters from the future. Joan Boix’s art has more personality than quality. It’s likable enough, as it’s cowboys and dinosaurs.

The Dan Dare is lame. Massimo Belardinelli has problems with figures, the writing’s dull.

Harlem Heroes is the nuttiest–a future version of the Globetrotters. Young Dave Gibbons on the busy art.