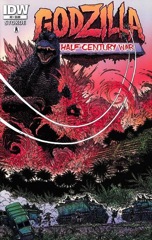 Wow. Stokoe does great work here. Except for the ominous soft cliffhanger, this issue of Half-Century War speedily surpasses what I thought was possible for a Godzilla comic.

This issue is set in 1967, in Vietnam. Though Godzilla (and possibly other giant monsters) roam the planet, the U.S. is still trying to stop the spread of communism in Southeast Asia. They just have to do it around Godzilla and Anguirus.

Stokoe does get in some giant monster fighting–probably three or four full pages of it–but he’s got lots of human stuff. There’s the funny scientist who makes the silly weapons to fight Godzilla. He introduces the idea of trying to bore through his hide to cause damage makes a lot of sense; I’ve never heard it before.

The protagonist doesn’t have a lot to do. Stokoe’s just using him for narration and that move’s perfectly fine.