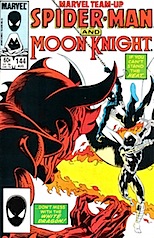 What a lame issue. I mean, I wasn’t expecting much when I saw Cary Burkett’s name on it, but it’s a lot worse than I thought. Pretty sure Peter gives away his identity–or at least risks giving it away–at the end of the issue too.

There’s a lot bad about it–Burkett’s expository dialogue is terrible, his constant narration is tedious. It takes forever to get through a page because he’s got so many narration boxes. Or are they narration squares? Did John Byrne ever weigh in on that one?

Maybe if LaRocque were a better artist it might be more tolerable.

Wait, I forgot a couple things. The white guys saving Chinatown from itself–the Chinese are way too corrupt to not need Spidey and Moon Knight to save them.