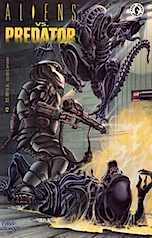 The change in inkers makes Aliens vs. Predator look exactly as drab and boring as I’d expected the first few issues to look. Campanella can’t do much to Stradley’s figures, but he rounds out the faces–not all the time, which makes the art disjointed–but definitely in close ups. Everyone looks like they’ve had the definition erased.

The issue’s a solid effort. Stradley is fully into the action part of the story now, so it’s nowhere near as good as the previous two. He’s strengthening his protagonist (while taking away most of her narration), but measuring her arc. She’s not acting out of character punching out a rancher, we just never got her in that situation the first issue.

The story sticks with the people, which is smart. Too much Predator stuff is boring and Stradley uses the aliens for mass effect, not to be scary.