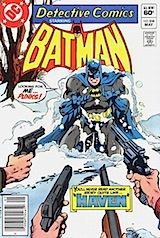 What a weak issue. I mean… it’s really weak. It’s competent in a way someone spending sixty cents might not complain, but it’s not good at all.

The feature is a Maxie Zeus story. Batman’s hunting him through a snow storm. There’s a scene where Dick and Alfred talk about worrying about him. It’s like they’re his wives waiting at home–which may or may not be a good take on the relationships, but Wein doesn’t explore it.

Instead, he introduces this hippie mountain man who loves all life. Maxie Zeus eventually kills him (after the mountain man loses it because Zeus kills a bird).

The art’s decent–Chiaramonte continues to be a bad inker for Newton–but the story’s just lame.

The Batgirl backup is terrible too. It’s Batgirl versus “the Queen of Serpents,” a circus performer who magically changes into a snake.

The issue’s just a complete misfire.