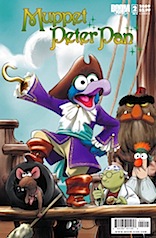 While solid, this second issue isn’t as strong as the first. Some of that weakness has to do with the content. Here we get introduced to Gonzo as Captain Hook. There are some very funny lines–especially with Rizzo the Rat as Gonzo’s first mate–but there’s definitely something off. Kermit (as Peter Pan) is barely in the issue. Even when he visually dominates, there’s something behind him going on to reduce his import. The focus is off here. It doesn’t wander so much as it’s misaligned.

I get why it’s difficult–the pacing of a Peter Pan adaptation requires a lot of separate introductions, but it’s a four issue limited series. Hook’s introduction is a first act kind of thing, but the limited series medium doesn’t really allow enough room. So Randolph’s hands are a little tied.

Oh, and I hate the digital backgrounds.