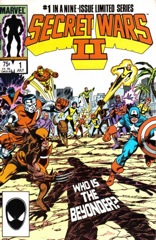 Could Al Milgrom’s art be any more boring? Shooter fills the issue–I can’t believe it’s not double-sized given the amount of content–with a bunch of nonsense, but he’s at least competent at filling those pages, but Milgrom’s artwork’s beyond lame. He’s got all these different characters to draw and he does the most standard job possible on them. His Captain America’s particularly weak.

It’s hard to decide the issue’s worst feature, but Shooter’s desire to show superheroes in everyday situations (Cap flying coach) certainly comes close–ignoring, of course, everyone knowing the Beyonder is Molecule Man, not just Molecule Man, who has a lot of Beyonder-like superpowers.

So what’s the best part of the comic? The “villain” for the issue is pure early eighties DC one appearance wonder–some pissed off writer going after capitalism. It’s hilariously awful.

This issue isn’t even a good toy commercial.