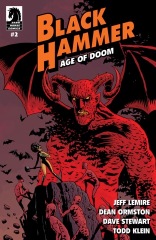 Black Hammer goes Vertigo. At least Lucy’s half of the comic. Not only does she go Vertigo and to Hell, she meets a former costumed hero-type who’s now in Hell as well. Lots of almost rhyming, sorry.

Wasn’t a former hero type in Hell a Swamp Thing plot point back in the day?

Lucy’s story is kind of an odyssey, but only after she gets sent to Hell, and only taking the cliffhanger into account. Otherwise, she’s just become a superhero–moments earlier–and is now on a crappy first adventure. With a lot of talking and not much of it relating to the Black Hammer story.

Meanwhile, back on the farm, it’s a Barbalien and Gail issue. They go to the library to investigate the empty books Lucy found last series. They’re in for a surprise. There’s also the moment when Gail tells Barbalien about an illicit romance… which got introduced in one of the spin-off books and really doesn’t have any emotional impact here.

It’s kind of concerning. But it’s also Ormston art and Black Hammer Prime has miles of goodwill to burn through. It doesn’t really burn any here, just implies it might.

Fingers crossed Lemire’s got some plans. Right now, it doesn’t seem like he’s got any plans.