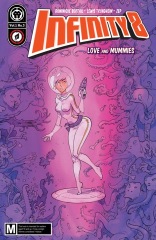 It’s a fine wrap-up for the first Infinity 8 arc. It’s kind of amazing how well Zep and Trondheim plot it since, once again, it’s all action. They’ve just gotten done with action, then there’s more action, and they don’t change settings. The issue doesn’t introduce anything new, just makes Keren figure out how to save the day with limited resources.

There’s some great character stuff this issue between Keren and her “love interest” Sagoss. It’s the first time Sagoss has been likable as anything other than an annoyance. Great expressions from Bertail on the couple as well.

Lots of humor, lots of lasers, lots of hungry aliens. The hungry aliens have a bit of a twist as far as their motivation goes, which is cool, as is the idea the book gets a soft reset at the end. The next arc will be after time has reset. The ship gets do-overs.

It’s hard to believe this book is only three issues in. Even with two all-action issues, Trondheim, Zep, and Bertail created a substantial story.