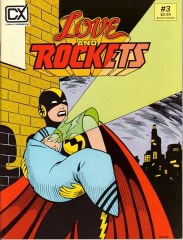 Love and Rockets #3 opens with a Jaime story. It’s just called Love and Rockets. A car stopped on the train tracks, its driver reminiscing about a lost love. Then the lost love thing takes a comic book-related twist. And then Jaime goes crazy with the intensity of an oncoming train and the driver’s endurance. The two-page story then has two additional twists… in the last two panels. Jaime turns it all upside down and inside out in a panel. And that last twist simultaneously grounds the story and makes it even more ethereal.

Love and Rockets‘s second page has a lot of black. There are nine panels on the page and only one of them doesn’t use silhouette to focus on the driver in her car. The next story, Beto’s Sopa De Gran Pena–you know, Soap’-uh deh Grawn Pen‘-uh–Heartbreak Soup opens with a white on black title panel then some more dark blacks. It also has all the violence Jaime teased. Though Beto shows the effects of the violence a lot more than the action of it. It’s for humor, after all. Tip in’ Tip in’ is just getting his butt kicked by another girl who doesn’t want him. It’s only his eighty-seventh such rejection.

Three pages into the story, on the bottom panel–after establishing a narrator to Soup–Beto brings in its protagonist. Carmen.

Carmen is maybe ten. She lives in Palomar, she tells the reader (so Beto’s gone from an in-story but uninvolved narrator to the protagonist breaking the fourth wall). Palomar. “Where men are men, and women need a sense of humor.” At the bottom of every page, Beto has pronuncations for the characters’ names. It’s also a good way to keep track of how many new characters Beto is introducing per page.

Seven on the first page, for instance. Because Beto moves to around nine panels a page (somewhere between eight and eleven), and he uses the foreground and background to bring characters in. It’s a beautifully drawn story. Beto loves his detail. There’s Carmen’s sister, for instance. Her younger sister, Lucia, not the older one. Lucia never talks and never gets to do much. Instead so just glares wickedly. Sometimes at the reader. It’s this fantastic visual detail.

The story continues, focusing mostly on Carmen and her older sister, Pipo. Pipo is fourteen and “all women” (ew). She has multiple suitors, with Manuel being the cute one and Gato being the kind of creepy one. The story is set when Pipo and Carmen’s mother is out of town. Pipo’s in charge, which leads Carmen to letting drunken melancholic Tip in’ Tip in’ (the guy who got beat up at the beginning) stay with them. Most of the rest of the story builds around that subplot. Though the teenage boys just hang out. New-to-town Heraclio learns about town and so does the reader. But he and his friends are mostly loitering, which also has Luba–from Bem in the first issue–showing back up. Chelo is the town’s bañadora (she washes the town’s men, who either can’t bathe themselves or just don’t have tubs?). There’s nothing creepy about it though. At least not yet.

Luba is the town’s new bandora. Their growing competition is a subplot. A quiet one, but one Beto returns to again and again. It helps him establish the town and gives him a surprising, touching grand finale to the chapter. Because Heartbreak Soup is to be continued.

Next up is Maggie vs. Maniakk, which has a Fourth Worlder monologuing at the start. Then it gets to Maggie and Hopey and Penny and company. Penny wishes she was a superhero (still) and it turns out Maggie was a superhero for a day.

Turns out she was sidekick to Ultimax, a washed up superhero who she has to convince to come back and save the world after she lets Maniakk out of an alternate dimension. It’s a fast, funny story with some great panels. Jaime will move the story forward not just in a panel’s narration from Maggie, but also in the dialogue. It’s great. He keeps up the pacing when it gets to the fight scenes too.

The story does, however, establish how mean some of Maggie’s friends are to her, which is going to come back in a bit.

Of course, nothing can prepare for Beto’s one page story. It’s a wonderfully done twenty-four panel (on a single page, usually with the same “shots”) weird little thing. Showcases Beto’s understanding of how dialogue works when being read against certain visuals. Amazing economy. 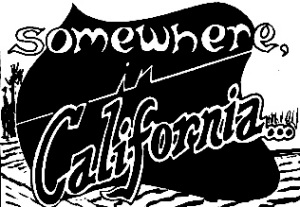 Then is another installment of Somewhere in California, by Mario. The last issue’s installment of this strip had a rather final ending, so a continuation is a surprise. The tone is a little different–and it’s much easier to follow on a casual read–but it still is a big story. The revolutionaries from the previous installment are still around. They’ve just trashed a movie director’s house. One of the revolutionaries slash terrorists has a girlfriend. Her ex-husband and his cleaning crew is hired to take care of the messed up house. Turns out the ex-husband is a failed screenwriter. There’s a lot of story. But most of it turns out to be about the protagonist failed screenwriter–Brian–ingesting some kind of lizard egg and the creature is growing inside him.

The blasé way Mario handles the lizard living inside the guy is the coolest thing about California. The ending is overcomplicated and the flashforward doesn’t work great, but it’s still a strong strip. Especially since it seems the flashforwards aren’t important (at least the first story’s wasn’t so why would this story’s be any different).

Back to Jaime (and Maggie and Hopey). Locas Tambien. It’s a two-page strip. It’s great–twenty-four panels over two pages, covering Maggie and Hopey going grocery shopping. It references Rand Race, who otherwise doesn’t make an appearance, but also establishes Maggie and Hopey’s friends think Maggie is dumb. Hopey doesn’t get much action after the first eight panels, instead Jaime uses her as a reaction touchstone for the reader.

There’s another La Chota strip. She’s a waitress. She beats up the cook. It’s all in Spanish. Maybe Spanish. But not a dialect Google likes to translate.

And then another creepy weird–but gorgeously illustrated–Beto one-pager. It’s about life in the Lower Side. Beto implies a lot in the three sentences of narration, which is cool. It’s just very, very weird.

Finally, another Jaime. It’s twelve pages–Toyo’s Request–and it’s a direct sequel to last issue’s Mechanics. Though it’s about world champion wrestler and revolutionary Rena Titañon. Only from the perspective of an ex-boyfriend. Rena is a great character–she’s doing a noirish detective story in the flashback, along with a bunch of action. Then the action increases to include airplanes and bombs and old wrestling rivalries. It’s a lot of fun with some excellent art.

Jaime runs out of time to tell the full story in the flashback, hopefully he’ll come back to it.

So #3 introduces quite a lot. However many characters in Heartbreak Soup, not to mention Palomar in general. Then Jaime’s building up the characters from the Mechanics, particularly Maggie, but also the supporting mythos.

And the weirdness of Somewhere in California, which has more danger than anything else in the issue. After Jaime’s first two-page story, anyway.