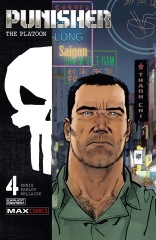 The tragedy of Punisher: The Platoon is almost unbearable. Ennis juxtaposes the Americans and the Viet Cong. The female Viet Cong Frank Castle, the Frank Castle Frank Castle. The one with a dark shadow over him, even though only the reader can see it. It’s not in the bookend narration. The vets sitting around being interviewed? They don’t acknowledge the tragedy of Frank. It’s the saddest thing in the world… an earnest Frank Castle.

And something I suppose you wouldn’t get if you weren’t entirely versed in the character. Or at least in Ennis’s Punisher MAX. Or some of it, anyway. It’s freaking intense. Nothing happens this issue; violent-wise, I mean. The two times things could go violent? They don’t. Ennis and his war comics realism.

Frank’s marines are on R and R. Drinking and whoring. Ennis loves writing the old men jovially recalling those days. It’s actually kind of cute, as very little else in Platoon ever gets to be cute. Frank’s Viet Cong alter ego’s mentor is sort of cute. But he’s also a brutal commander so it’s a problematic cute.

There’s a conversation scene with Frank and one of his men. Just talking about their lives. Frank Castle talks about his personal philosophy. The other guy offers him advice. It’s extremely affecting as it continues because it’s so foreign from Punisher comics. Freaking Ennis. So good.

Parlov’s art is awesome. No action, lots of talking heads, just beautifully paced visuals. Parlov’s really got this one down.