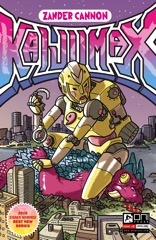 This issue has three storylines. First, the Kaijumax escapees holing up with a known associate who’s on parole. Cannon’s got a wonderful amount of detail for these scenes, how a giant monster goes about his or her daily life. Very sad stuff. Apparently Season Two of Kaijumax is going to address the bigotry against giant monsters, which seems slightly problematic. The regular people in Kaijumax are problematically portrayed in general, but in Season Two they’re basically all complete asshats. They abuse the paroled monsters, relishing in humiliating them. Like I said, not a happy book.

Then there’s the giant monster fighting robot whose brother is on Kaijumax and she’s writing him a letter about her human pilot. Cannon tries to do a whole lot as far as introducing new elements (life on the outside, life as a regular kaiju hunter, man or machine) and it’s not always successful. The art helps with a lot, but Cannon’s relying a lot on phrase references to Godzilla movies and so on. It’s just a lot, with characters blathering just to blather and to drop a Godzilla: Final Wars reference.

And that reference is fun and cool, it just doesn’t do anything for the book.

The third storyline is the disgraced prison guard. He has a decent enough scene, not too expository even though someone’s trying to tell him about life, but it doesn’t resonate. Nothing resonates yet. It’s all just histrionics and great art.