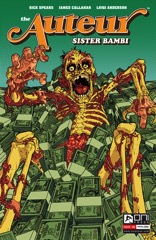 I enjoyed this issue of Sister Bambi. The soft cliffhanger, especially considering the comic opens with a comedic bookend, is annoying but in a pointless kind of way. Spears is still chasing something with the series, even though once you bring in zombie triceratops, you’ve sort of given up.

Spears is no longer bothering trying to find absurd humor in Hollywood movie-making. He’s barely trying to find humor. He’s certainly not sensationalizing the reader anymore. Instead, he’s just running amuck on Bambi, which is fine, because it gives Callahan stuff to do. Unfortunately, even though the book’s best as an example of Callahan’s skill and inventiveness, the script forces Callahan to be too inventive. Spears doesn’t give him enough room for all the lunacy. So there are these battles between the serial killer guy and the zombie lions, tigers, and bears, and Callahan has to do them in these little panels. They’re great little panels. But I’ll bet he’d have done better not illustrating them on postage stamp scale.

Let’s see if I missed anything–some lame one-liners, lots of crazy action, a too obvious subplot–nope, I got it all. Sister Bambi has gotten to the point I don’t remember much between issues, which is good; I’d also remember when the series was a lot better.