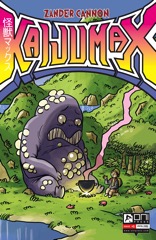 It’s a thoroughly okay issue, but there’s way too much information about the setting. One of the prison guards gets in a fight while off duty–so think Ultraman fighting a bunch of fighter jets and mecha-whatevers–and the boss shows up and clears things up. During that clearing up, lots of exposition.

And Kaijumax all of a sudden feels like Pacific Rim. Cannon’s been mixing sixties and seventies kaiju movie visuals and silliness with extremely difficult prison stuff. Then he brought in Pacific Rim and he loses his footing.

The slipping continues as Electrogor is in therapy with his shrink (the human woman who’s in love with his assailant). The scene seems too forced, with Cannon going too hard for the emotional devastation for Electrogor.

Minya’s poisoning of Godzilla is similarly problematic. Cannon’s pacing for it (and the issue) is off.