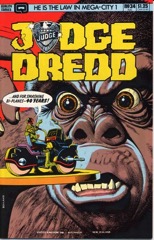 It’s an excellent issue about a vigilante hitting various organized crime guys in Mega-City One. Does it make any sense for there to be mobsters above the Judges? No. It’s sort of weird and has something of a retro vibe–like it doesn’t really star Judge Dredd but his training officer.

Nice art from Ezquerra and Ian Gibson. There’s a lot of precise action in the story–Dredd is sure the vigilante has been trained as a Judge and the vigilante has a couple intricate plans to execute. The art on those sequences is real strong and would be surprisingly ambitious if Ezquerra and Gibson didn’t also take a very grand approach to Dredd himself this story.

The backup has Dredd fighting a giant ape robot. Ezquerra’s art is inventive, Malcolm Shaw’s script is short and goofy.

That lead story is rather good Judge Dredd.