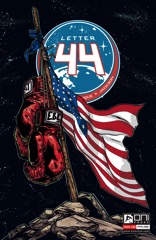 Soule frames the issue around a speech from the President, revealing the existence of the aliens. He’s also got some scenes in space–the majority of those scenes are useless by the end of the issue–and some earthbound political intrigue.

He also has the United States and Germany going back to war and nothing happens from it. It’s an exceptionally interesting idea, one with a lot of promise, but Soule just uses Germany as this little group of villains. It’s a strange misstep, given how smart the rest of Soule’s political intrigue usually goes.

And the stuff in space isn’t great. The issue has some of Alburquerque’s best art at the beginning during a boxing match, but then the encounter with the aliens is poorly illustrated. There’s no depth or perspective to the art.

As for the aliens… Hopefully Soule has something more going than what he does here.