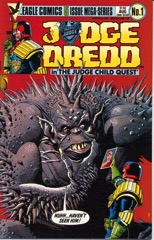 Judge Dredd heads into the Cursed Earth looking for a mutant child who’s going to have to save Mega-City One, or so one of the pre-cogs says. Writer John Wagner comes up with some decent encounters for Dredd–this issue’s primary villain is a “garbage god” who has thousands of slaves mining antiques from pre-apocalypse Memphis for him. There’s an ancient Egypt thing too; it doesn’t make much sense, but the Brian Bolland and Ron Smith are is excellent so it doesn’t need to make any.

The series is more compiled entries from 2000 AD but never feels too bumpy–with Wagner so focused on Dredd trying to find the child, it’s mostly action. The biggest bump comes after the end of the Garbage God episode, with Dredd continuining his hunt into Texas.

That finale, which leads to the cliffhanger, makes the issue seem a tad bloated.