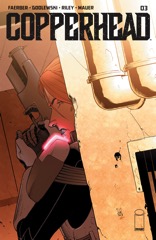 From the first page, there’s something off about this issue of Copperhead. Godlewski goes with a full page spread but of a really bland situation–actually, it’s supposed to be a tense situation but the full page spread makes it bland. Then the scene itself is bland, with Faerber eschewing logic and character.

The issue itself moves way too fast–there are three or four scenes, all of them part of the police investigation, none of them doing any character work or even establishing the setting. Godlewski gets to draw a few locations–there’s a mine, for example–but the comic rushes through them.

And then the finale reveals everything so far has been connected, which makes Copperhead feel really small and contrived. It’s still a decent comic, it’s just not on par with what Faerber and Godlewski have done until this point.