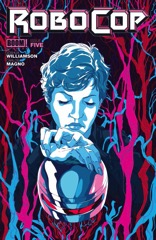 Once again, there are occasional moments where this issue of Robocop feels a little bit too much like Robocop 2. Not even the action, but the way Williamson is moving things along for Murphy. The evil OCP conspiracy, him having to get fixed. In terms of action, however, there is an ED–209 fight and Murphy having a super-nightstick instead of a gun.

Also, Robocop not getting a gun feels a little too much like Robocop 2 as well.

I hate bringing up those comparisons, but Williamson was setting Robocop the comic up to be something different. Magno’s art is still gritty (though really problematic in this issue) so some of the details really don’t play.

But there’s good character work on Lewis, if her dialogue gets a little too much towards the end of her scenes. And some nice small parts from familiar movie characters.