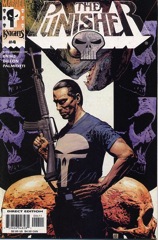 I wonder if Molly the detective wears sunglasses so Steve Dillon gets a little less to draw. I assume they’re also there so she looks too cool to hang out with Detective Soap, but still. It’s disconcerting having a character without expressions.

This issue, save the killer priest scene, which is particularly crappy, is rather good. Ennis sets up the detectives teaming up and does a little comedy relief with Soap. But most of the issue is real time with Frank on the run through Central Park. Some of the exposition is odd–Frank pauses to watch polar bears eat a bad guy and Ennis all of a sudden introduces the idea he’s a sadist for sadism’s sake. It’s brief, all by itself and very strange.