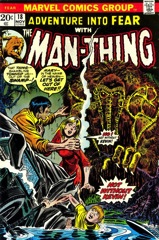 It’s really bad art. From Mayerik and Trapani too. Maybe the inks are a little off but I think a lot if it must be the pencils. I really hope it’s not some new style they’re working on. Because it’s bad.

Gerber tries very hard with this story, which is sort of a talking heads disaster story, very self-aware microcosm of American life thing. He tries so hard and he fails. He fails miserably. The tone is off and none of the many things Gerber does to even establish one fails. It’s like he’s got an earnest idea and no way to honestly do it in this comic.

But then there’s the bit action finale and it’s great. It’s a classic horror problem with a modern, slightly askew approach to it. Gerber sort of saves the issue; he gets credit for the attempt.

That art is really bad though.