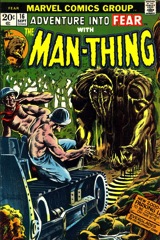 Sal Trapani inks Mayerik fairly well. Everyone looks a little too Marvel house style for it to be a horror comic, but it’s good art. There’s a lot of action in the issue, with Man-Thing getting involved with these Native American kids who decide to attack an industrialist destroying the swamp. They do it in costume, which gives the book an odd feel.

It’s modern, but then you’ve got these Native Americans in the swamp and it feels like a Western comic or something. Like the cowboy gets lost in the swamp.

No one gets lost here.

Gerber keeps his supporting cast around, even after the vague closure of their last appearance. It gives the setting a good feel–they show up in a crowd scene and Gerber focuses on them–and the familiarity is nice.

Plus, Gerber writes the Man-Thing narration well. It’s confused, just like him.