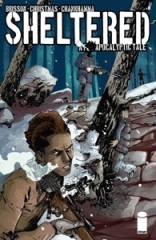 Brisson has hit a plateau with Sheltered. He’s already established he’s willing to have the kids be awful, he’s already established there aren’t many limits, so where’s there to go? The story can’t leave the compound–though this issue has a bit of a field trip from it–and he’s also not getting rid of any of the main characters yet.

This issue doesn’t feel like a bridging issue, even though the soft cliffhanger promises another big shoot out soon, and there’s some definite progress with the supporting cast. The progress just feels like more of the same. Brisson has started developing the supporting players a little more, which is sort of predictable. Limited cast, you do closer looks at them.

It’s a good enough comic and Christmas’s art is really solid throughout, but the story is starting to run out of fuel. The gimmick might be run out.