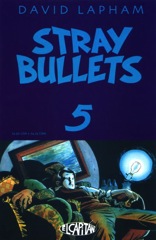 Lapham goes for mood a lot this issue. Only, he doesn’t do it with the art, he does it with the lettering. He does it with the “sound” going around, the dialogue. It’s a fantastic sequence. It takes place during a party, which is sort of confusing as many of the guests seem to be the same as the other party from a previous issue. But it’s definitely a different party.

The protagonist of the issue is a teenager who witnesses a car accident. He falls in with an older woman who knows Spanish Scott and Monster (we later learn) but mostly the story is the kid’s. He’s got an overbearing mom, a rebellious younger sister, an ineffectual dad. Lapham does a great job showing his frustration at his inability to take control of his life.

The ending, which is problematic, is also awesome. Lapham really scores.