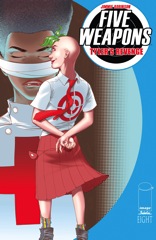 I almost feel like I need to go back and read Encyclopedia Brown to see if that series is where Robinson is getting his cliffhanger approach from. If so, I’ll bet Five Weapons reads great in a trade.

Besides the cliffhanger, which frustrates instead of intrigues (as usual), it’s an excellent issue. Enrique is investigating who poisoned the nurse and spends a lot of the issue all by himself, sneaking around the school, seeing stuff. Robinson has managed to turn the comic into a mystery book; it’s nice to see he can do things with different genres in it, though there’s always a mystery element when it comes to Enrique’s solutions, I suppose.

The opening, where Enrique talks himself out of trouble with the archery teacher, at first seems overlong. It’s a lot of talking and bad jokes. But Robinson backs them up with a good flashback.