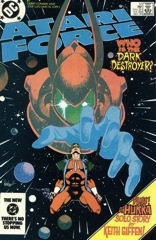 I think the problem is simpler than I would have thought–by problem I mean why Conway’s not as on the ball with the series anymore. He’s not even taking the time to script, just plot. Andy Helfer’s got the inglorious task of scripting. It’s hard to hold the issue against Helfer, the series’s breaking.

Atari Force works when it’s about the characters and García-Lopez’s approach to sci-fi. There’s a lot of villain stuff–it’s just Bond villainy at an intergalactic level. Maybe with some Road Warrior thrown in. Boring.

Worse, the character stuff this issue is tepid. Dart being patient with Blackjak isn’t engaging, especially not with Helfer’s very calm, almost feminist approach to his betrayal. And surfer boy’s trial scene is really weak.

Hopefully the series will improve.